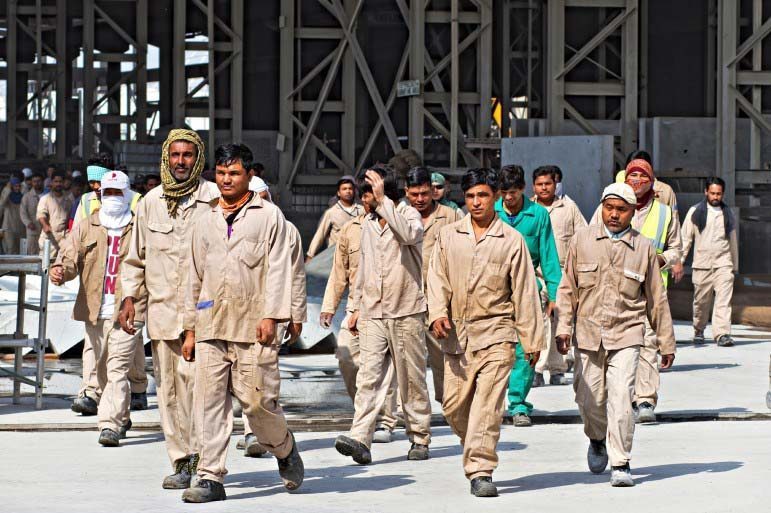 comments from a Vinci spokesperson

In a bid to improve conditions for Qatar’s migrant workforce, a human rights organization is seeking the intervention of a foreign court after accusing a French company of mistreating laborers in Doha.

Paris-based Sherpa told Doha News that it recently filed a legal complaint with a public prosecutor in its home country to investigate French infrastructure giant Vinci.

Vinci’s Construction Grands Projects division owns 49 percent of QDVC, one of Qatar’s most prominent developers. The other 51 percent is owned by the Qatari Diar, the real estate arm of the country’s sovereign wealth fund.

Sherpa alleges that workers on QDVC projects are subjected to “forced labor.”

In a statement, Vinci – which has some 3,500 employees in Qatar – denied the charge and said this week that it would sue Sherpa for defamation.

Members of Sherpa, which is an association of lawyers working on behalf of financial crime victims, visited Qatar last November and spoke to some 20 laborers working on various QDVC projects, including Sheraton Park and the Doha Metro’s Red Line South.

Marie-Laure Guislain, the head of litigation in Sherpa’s corporate liability department, told Doha News that her team interviewed both workers directly employed by QDVC and some subcontractors.

Seven workers agreed to sign statements and allow Sherpa to use their testimony, she said.

According to Guislain, the workers said their employer had confiscated their passport – which is illegal under Qatari law – and threatened them if they complained about their living and working conditions, or asked to change employers.

In response, Vinci said in its statement that the company goes beyond the minimum standards of Qatar’s labor laws and basic human rights:

“We have built new housing facilities at the beginning of this year in order to provide our workers with better living conditions. Moreover, 70 percent of our workers decide to return to QDVC and sign new two-year contracts when their previous contracts expire and they return from their holidays.”

A Vinci spokesperson, who asked not to be named, told Doha News that QDVC previously rented accommodations for its laborer workforce that lacked individual safety boxes for each tenant.

As such, passports were collectively kept in a master safety box, the spokesperson said. Every worker signed, in their own language, that they authorized the camp supervisor to keep their passport in a safe place.

“At any moment, at any time, if they wanted to get the passport could go to the camp manager and get their passport,” the spokesperson said.

“We were not happy with that system, but there was a (shortage of) worker’s housing in Qatar.”

In January, QDVC opened its own labor camp in Al Khor with a capacity of 2,000 tenants. There are no bunk beds and each room sleeps a maximum of four people, each of whom has their own safety box, the spokesperson said.

“As soon as we complete the residence ID process, we give back their passport.”

When asked about its subcontracting policy, the spokesperson said there are two to five full-time QDVC employees assigned to audit the suppliers and subcontractors on each project. These audits include a check on how these firms treat their workers.

Vinci often makes recommendations on how its subcontractors can improve their policies and has terminated its relationship with some firms that have not been receptive, the spokesperson said.

This is not the first time that a human rights organization has thrust QDVC into the spotlight.

In its landmark 2013 report on migrant labor in Qatar, Amnesty International documented abuses perpetrated by an unnamed company that was a supplier to QDVC’s Sheraton Park project – a four-level underground parking garage beneath a landscaped park near the iconic Doha hotel. 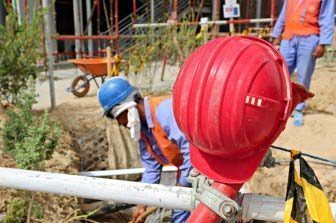 The allegations included forcing laborers to work 12 hours a day in the summer, including in areas exposed to the sun, failing to provide employees with adequate safety equipment and paying overtime erratically.

While the alleged abuses did not occur on the actual Sheraton Park worksite, they raised questions about the role of lead contractors such as QDVC in supervising the actions of their suppliers and subcontractors.

“QDVC and companies like them have a responsibility to ensure the rights of their workers are fully respected, including (those employed by) suppliers,” Amnesty researcher Mustafa Qadri told Doha News.

Some local organizations, namely Qatar Foundation as well as the Supreme Committee for Delivery and Legacy – which is overseeing the construction of the country’s 2022 World Cup stadiums and training facilities – appear to have a similar attitude.

Both have so-called workers’ charters that set out minimum working and living conditions for the employees of companies that win contracts with the organizations.

The Supreme Committee document states that it is the responsibility of the lead contractor to ensure its “other contracting parties” comply with the workers’ charter.

“We’re not talking about QDVC directly being responsible for the abuses. But nevertheless, we’re talking about suppliers working (for) QDVC,” Qadri said of Amnesty’s 2013 report.

He said he could not comment on Sherpa’s allegations. However, Amnesty has used the term “forced labor” to describe the situation of many workers in Qatar.

Qadri said this includes individuals working under terms that they did not consent to, as well as under coercion. He said this is enabled by Qatar’s sponsorship, or kafala, system, which prohibits expats from leaving the country or changing employers without their sponsor’s permission.

“It creates the conditions where the risk (of forced labor) is very high,” Qadri said.

While the legal complaint involving Vinci was filed with authorities in France, lawyers in other jurisdictions have looked at similar measures in the past.

In 2013, UK firms working on projects in Qatar were warned that they could could face civil actions filed on behalf of migrant workers in their home courts.

“If a British company engages on a project on which migrant workers are subject to abuse, then they must face the very real prospect of being held to account in this country for their actions,” Nichola Marshall from law firm Leigh Day told the publication Construction Manager.

Sherpa faces an uphill battle in launching a legal case against Vinci. Guislain said that even if they can convince a prosecutor to launch an investigation, there is no guarantee that charges will be laid or that Vinci would be found guilty.

However, Guislain said she hopes that the public attention any such case garners will prompt multinational companies to take the issue of workers’ rights more seriously.

“We really hope that this complaint makes a difference for workers. We really want these complaints to improve the working conditions on Vinci’s work sites.”