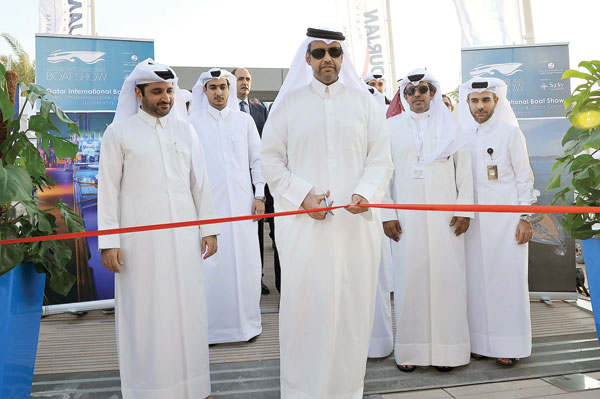 The Minister of Economy and Commerce H E Sheikh Ahmed bin Jassim bin Mohamed Al Thani inaugurated the five-day event and toured it, accompanied by Essa Al Mannai, Chairman of Snow Comms, organisers of the event, and other officials.

The 150-tonne dhow incorporates latest advancements in technology while maintaining the traditional look of a dhow.

It is the first of its kind in the luxury dhow category with yacht specifications.

The entire build of the design takes from 18 months to two years, and Al Mannai Marine has six dhows in production.

Its exterior is made of solid teak wood, while the interiors have been designed and made in Italy.

It contains five bedrooms with en-suite bathrooms of Onyx and marble, and the interior fit-out cost in excess of QR2m.

A tour of the Nakilat shipyard in Ras Laffan will be held this morning for visitors by special invitation.

Other events include a repeat of last year’s popular Fly boarding demonstration, a drive through of over 30 classic Harley Davidson bikes and kite surfing and paddling demonstration.