For the first time, a trio of US airlines has offered detailed figures to support claims that Qatar Airways, Emirates and Etihad receive government funding that allows them to unfairly compete against American carriers.

In the case of Qatar Airways, those state subsidies are alleged to have added up to more than US$16.5 billion since 2004.

“While Qatar Airways claims it is not subsidized, the truth is the exact opposite: without the subsidies, the airline would not be commercially viable,” the airlines’ critics charge in a report released late Thursday.

The report was submitted to US government officials last month, but not released to the public until a few days ago.

US airlines have long argued that they face unfair competition from the Gulf. Those claims have been consistently denied by Qatar Airways CEO Akbar Al Baker and his counterparts in Dubai and Abu Dhabi.

Earlier this year, the three largest US carriers – American, Delta and United – renewed those allegations with claims that the Gulf carriers have received billions of dollars in government subsidies.

Saying this violates the spirit of the country’s Open Skies agreements with Qatar and the UAE, the carriers are calling on American politicians to renegotiate those deals.

As they stand, airlines – rather than governments – decide on the frequency, capacity and fares of flights between the two countries.

Up until late last week, the US carriers had failed to provide any details to support their allegations. However, an advocacy group called Americans for Fair Skies has since released a 55-page report that forms the basis of the airlines’ most recent accusations.

Qatar Airways is owned by the government and does not disclose its financial results. 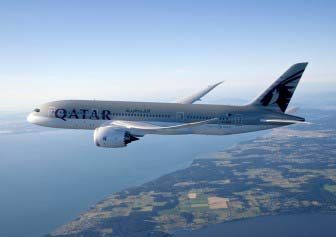 However, its critics say they obtained summaries of the airline’s annual account filings from “certain third country jurisdictions” that they claim show the Qatar government has provided financial assistance to the carrier “since its inception” in 1993.

“The subsidies – over $16 billion in the past decade alone – have enabled Qatar to expand at a rate that would have been impossible otherwise and to remain in business in spite of its poor financial performance,” the report states.

The specific allegations include:

Additionally, Qatar Airways is accused of receiving “unquantifiable benefits” from its monopoly on alcohol sales in the country through its Qatar Distribution Co. division. The report also asserts that the landing fees at Hamad International Airport “are among the lowest in the world, and far too low to cover the airport’s capital expenditures.”

In other words, Qatar Airways’ rapid growth was helped by the government’s multi-billion dollar financial support of HIA’s construction.

The national carrier has not yet specifically commented on the report that was released Thursday.

However, questions have been raised over what exactly constitutes an unfair “subsidy.” For example, some aviation observers have pointed out that some US carriers have benefited from American bankruptcy protection laws that allow companies to continue operating as they restructure.

“We don’t receive any subsidy. What the government has given us is equity into an airline which it owns.”

The US carriers disagree with Al Baker’s interpretation and, citing the World Trade Organization’s definition, argue that the financial infusions amount to subsidies that violate the spirit on the Open Skies agreements.

This, critics charge, runs counter to US aviation policy, which seeks to “(e)nsure that competition is fair and the playing field is level by eliminating marketplace distortions, such as government subsidies…”

Furthermore, the Open Skies agreement between the US and Qatar states that airlines in both countries should have “a fair and equal opportunity” to compete.

If the US airlines are successful in convincing American lawmakers to renegotiate the agreements with Qatar and the UAE, the Gulf carriers could face restrictions on the number of US flights they’re allowed to operate.

That’s currently the case with other countries such as Canada, which limits Qatar Airways to three weekly flights to Montreal despite the airline’s interest in expanding service to the country.

However, it’s not clear how much popular support the American carriers have in the US in their fight against the Gulf carriers.

They are among the largest customers of US plane manufacturer Boeing, which has benefited from the airlines’ rapid expansion.

Meanwhile, the success of the Gulf carriers in the US has shown that many American passengers prefer the service offered by Qatar Airways, Emirates and Etihad over their own country’s carriers.