Media coverage of Islam in the west is leading to the dangerous “dehumanization” of Muslims around the world, Qatar’s Sheikha Moza bint Nasser has warned in an unusually frank address at the University of Oxford yesterday.

During her speech, the Qatar Foundation chairperson and mother of the Emir accused western nations of employing “double standards” when it came to reporting on deaths of Muslims in violent situations.

“Why is it that apologies are offered when Europeans are mistakenly killed by drones but only silence follows when innocent Yemeni and Pakistani children and civilians are killed by the same drones?

Why do Muslim lives seem to matter less than the lives of others? If they matter at all. I believe this dehumanization is cultivated through a process of Muslim-phobia.”

She also compared the international condemnation that followed the Charlie Hebdo massacre in January, when 12 people were killed, with the resulting discourse after three young Muslim students were gunned down in their home in North Carolina the following month. 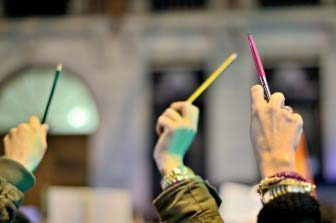 “Why is it that world leaders gathered to march in defense of Charlie Hebdo, while the Chapel Hill murders were shrugged off as a parking dispute?” she was quoted as saying in the Guardian.

She said that regardless of a person’s nationality, their identity was being defined solely by their religion, an action that “homogenized” Muslims as a single “other” entity, of which people had become fearful and distrustful.

“For example, a Muslim is first and foremost identified as a Muslim, rather than simply a human being. Whether they are Pakistani, Malaysian, Senegalese, or even British-born, their multiple identities are leveled under a constructed monolith of Islam,” she said.

The prominent wife of the father Emir was speaking yesterday as she opened an extension to the Middle East Center, which was designed by Iraq-born architect Zaha Hadid.

While she regularly gives public addresses, these are usually in relation to health and education rather than international politics.

During her speech, Sheikha Moza highlighted the use of the word “medieval” by media to describe the actions of armed groups in the region.

“It is a naïve refusal to accept our collective responsibility. Isis is as modern as Guantánamo and Abu Ghraib. They are all products of our age,” she said.

She also said Muslim countries themselves are to blame for practicing “Islamophobia from within” by creating fear and suspicion of all things Islamic in order “to solidify (their) existing grip on power,” QNA quotes her as saying.

Rather than suppressing demands for change, as has happened in the so-called Arab Spring, people in the Muslim world should engage in discussion, she added:

“It is evident that colonization leaves behind deep material, political, cultural and psychological scars, and gaping wounds. Debate is needed. Violent repression is not. Could this be a reason why we, as Muslims, have lost confidence in our ability to apply the universal and eternal Islamic values to our living traditions?”

Finally, Sheikha Moza called on young Muslims to take on the responsibility of showing that “Islam is a rich, living moral tradition that can offer solutions to universal challenges” in the future.

Her comments follow the recent publishing of an opinion piece by the Emir Sheikh Tamim bin Hamad Al Thani for the New York Times in February, in which he said that extremists were driven by “hopelessness,” rather than any religious beliefs.

“It’s the kind of hopelessness that abounds in the Syrian and Palestinian refugee camps, and in war-weary towns and villages in Syria, Iraq, Yemen, Libya and Gaza,” he added in the column, which was published ahead of his first state visit to the US.

The outspoken statements come at a time when Qatar is facing heavy criticism in European and North American media for human rights and workers’ welfare ahead of hosting the World Cup, in addition to a perception that it supports armed groups that are active in the region.