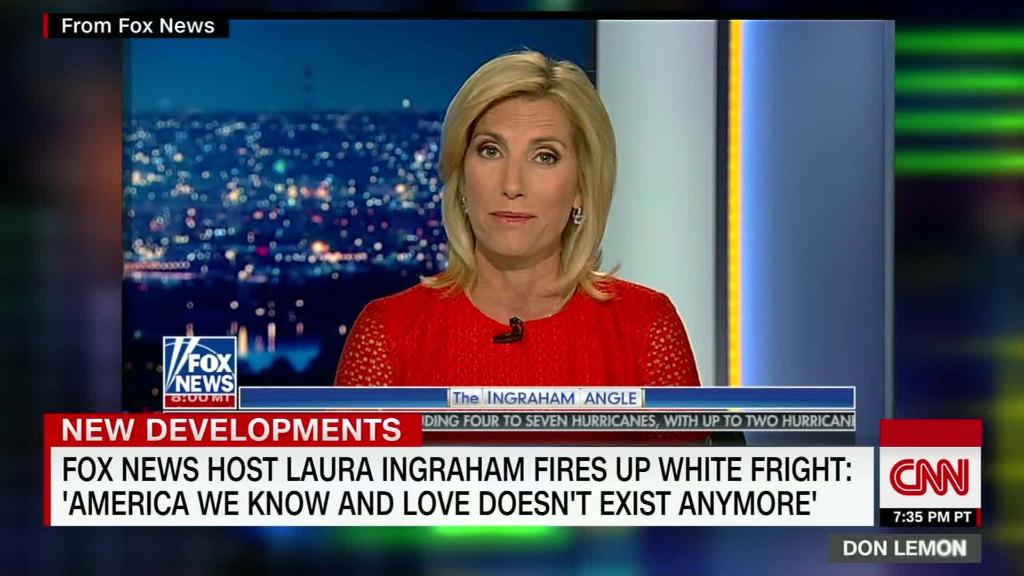 It wasn’t so much a dog whistle as it was an airhorn. Or perhaps a primal scream. But whatever it was, Laura Ingraham’s forceful denunciation of “massive demographic changes” served as another raw example of a Fox News host echoing white nationalist language.

Perhaps it was a glimpse into President Donald Trump’s well of support, too.

The Fox News audience is almost 100% white, according to Nielsen. And on the channel’s highest-rated shows, the politics of white anxiety play out practically every day, as hosts and guests warn about the impacts of immigration and minimize or mock the perspectives of people of color. The talk show segments are clearly intended to appeal to people who perceive they are losing their grip on power.

In 2018, Tucker Carlson, at 8 p.m., and Ingraham, at 10 p.m., spend the most time on this subject. (The host in between, Sean Hannity, concentrates more on defending Trump.)

“The America we know and love doesn’t exist anymore,” Ingraham said Wednesday night. “Massive demographic changes have been foisted on the American people, and they are changes that none of us ever voted for, and most of us don’t like.”

Ingraham said “this is related to both illegal and legal immigration.”

The commentary was amplified on social media by the liberal, anti-Fox watchdog group Media Matters. Many people who viewed it on social media were shocked, as her rhetoric went beyond what other conservative commentators have said in the past.

Nearly 24 hours later, Ingraham’s name was still a top trending topic on Twitter. Media Matters made a video asserting that Ingraham’s “anti-immigrant rant” was “ripped from white supremacists.” Some Democratic lawmakers also spoke out. Senator Tammy Duckworth tweeted that the “racist” comments “shouldn’t have been aired by @FoxNews.”

In a part of the commentary that didn’t circulate widely on social media, Ingraham said, “There is something slipping away in this country and it’s not about race or ethnicity. It’s what was once a common understanding by both parties that American citizenship is a privilege, and one that at a minimum requires respect for the rule of law and loyalty to our constitution.”

But Ingraham’s critics said her “not about race” line didn’t negate her inflammatory lament about “massive demographic changes.”

Where are the Murdochs?

Fox’s opinion hosts tap into — and sympathize with — a deep vein of concern about cultural displacement. Whiteness under threat is a common theme, especially on Carlson’s show, during which he often laments the mistreatment of white people and the influx of foreigners.

Media Matters and other outspoken Trump critics have accused him of promoting white nationalist ideas, a charge he has repeatedly rejected.

Although some advertisers avoid some of Fox’s talk shows, citing various controversies, the shows are highly profitable for Fox and its parent company 21st Century Fox. Among the beneficiaries are Rupert Murdoch and his sons James and Lachlan, who jointly run the company.

Do the Murdochs encourage Fox’s prime time direction? Or do they hold their noses? That’s unclear, even to experts who follow the industry closely. In the past, the Murdochs have expressed opposition to Trump’s hardline immigration policies and rhetoric.

But Fox absolutely knows what its audience wants. It’s not exclusive to the network: Researchers say the anxieties of white Christian America have also fueled conservative talk radio and digital media. And Trump expertly tapped into the same thing with his speeches about restricting immigration and saying “Merry Christmas” again. Infamously, Trump decried immigrants from places in Africa and Latin America, which he described as ‘shithole countries.’

All of it relates to a supposed loss of cultural dominance among white people.

“When Ingraham talks about America not looking like the America it used to be, that does indicate a perceived lack of status,” said Andra Gillespie, a political science professor at Emory University. “And some people are motivated by a desire to regain that status.”

As Gillespie and others have noticed, Trump wasn’t penalized by voters for expressing racial anxieties that politicians previously would have avoided. Quite the opposite, in fact.

“It was exactly these kinds of fears about cultural change, cultural displacement and immigration that were the key drivers of support for President Trump,” said Robert P. Jones, the head of the Public Religion Research Institute.

Fox’s particular appeal to white Christian voters has been well documented for years. Sociologist Arlie Russell Hochschild, in her 2016 book “Strangers in Their Own Land: Anger and Mourning on the American Right,” found that “Fox is family” for some Tea Party supporters in Louisiana.

“Fox News stokes fear,” Hochschild wrote. “And the fear seems to reflect that of the audience it most serves — white middle- and working-class people.”

Right now, the biggest fear among Fox viewers might be the changing face of America, or as Ingraham put it, “changing demographics.”

White supremacist websites express anger over the changes in far more hateful and hostile ways than anyone on television does.

But Fox is often perceived to be giving voice to those views.

But white nationalists are certainly familiar with Carlson. As Vox’s Carlos Maza detailed in a video that went viral last year, Carlson’s show has won praise from white nationalist Richard Spencer, former Grand Wizard of the Ku Klux Klan David Duke and the neo-Nazi website The Daily Stormer, which called the host its “greatest ally.”

Carlson has impressed those types with his repeated on-air complaints about immigrants and Muslims. In fact, Ingraham’s comments on Wednesday essentially echoed what Carlson has said on his own show. In March, Carlson commented on Hazleton, Pennsylvania, where the Hispanic population has grown exponentially since 2000, saying such demographic changes were “bewildering for people.” Behind Carlson was a graphic that read: “Changes in America.”

“That’s happening all over the country. No nation, no society has ever changed this much, this fast,” Carlson said. “Now before you start calling anyone bigoted, consider and be honest: how would you feel if that happened in your neighborhood?” Last month, Carlson went even further, saying that “Latin American countries are changing election outcomes here by forcing demographic change on this country, at a rate that American voters consistently say they don’t want.”

Carlson did not cite a source for that claim. Recent Gallup polls indicate an overwhelming majority of Americans — 75% — view immigration as a “good thing” for America.

One of Carlson’s most frequent critiques is that liberals are too obsessed with race, and too quick to make claims of “racism.” But that critique ends when it comes to purported racism against whites, as evidenced by his coverage last week of Sarah Jeong, an Asian-American journalist who will join the New York Times editorial board next month.

Jeong’s hiring generated a firestorm of controversy for a number of tweets in which she made disparaging comments about white people, for which Carlson called her “an angry bigot and not in a subtle way.” (Jeong called the comments “satire,” and said she regretted that she had “mimicked the language of my harassers.”)

Carlson also made the accusation against a person of color last month, when he had University of Louisville professor Ricky Jones on his program. Carlson’s ire was drawn by a column that Jones had written, in which the professor considered whether it was right for the black 20th century writer James Baldwin to call white Americans “moral monsters.”

“As he did throughout his life, Baldwin raises difficult but necessary questions with which we must wrestle. Why are so many white Americans so brutally mean and inhumane?” Jones wrote. “Why do so many others feel comfortable justifying or excusing it? Why do others still, who claim ‘not to think that way,’ find it acceptable to say little and do even less? Make no mistake, there are certainly whites who stand in the tradition of William Lloyd Garrison, John Brown and others. However, reasonable people must admit they are the exceptions, not the rules.”

Carlson zeroed in on that second sentence — “Why are so many white Americans so brutally mean and inhumane?” — ignoring the rest and accusing Jones of “abetting racism.”

“Wouldn’t you say you’re a racist? As you clearly are,” Carlson said.

Jones, the chairman of the Pan-African Studies Department at Louisville, told CNN Thursday that the interview “went exactly as I thought it would go.”

Carlson “was not interested in having a legitimate conversation about race at all,” Jones said. “He was doing what he does every night. He was playing to racially insensitive sensibilities that have permeated that audience at Fox. They know the audience they’re playing to.”

And while many observers were stunned by Ingraham’s comments on Wednesday, Jones wasn’t one of them.

“That was jarring to some people, particularly white liberals,” he said. “That’s not jarring to black people who have any type of political consciousness. We’ve seen that type of behavior. We’ve lived that for a long time.”

The anxieties aren’t likely to fade away soon. Trump, Ingraham and Carlson all have found an audience for their calls to return America to a mythical long, lost era. One such supporter rose to Ingraham’s defense on Wednesday night, calling her comments “one of the most important (truthful) monologues in the history” of the mainstream media.

It was David Duke.