Nearly a decade ago, residents of Arivaca, Arizona, knew little gun-toting vigilantes patrolling the nearby borderlands hugging the US-Mexico frontier.

Gallivanting up and down the border with military-grade weapons and probing the desert area, the Minutemen American Defense militia captured and bound immigrants, intimidated and threatened them, and sometimes forced them back into Mexican territory.

Locals say the militiamen rarely interacted with the townspeople in Arivaca, a small unincorporated community situated around 17km from the border and home to hundreds of residents.

But on May 30, 2009, three rogue Minutemen – Jason Bush, Shawna Forde and Albert Gaxiola – changed everything. Convinced a home in Arivaca was a stash house for a Mexican drug cartel, they stormed the residence and unleashed a hail of bullets.

As Raul Flores slumped dead on the couch, his nine-year-old daughter Brisenia begged for her life. The gunmen shot her in the face as her mother played dead on the floor nearby.

A court later sentenced Bush and Forde to death and sent Gaxiola to prison for life, while Arivaca was left to mourn the dead. “We were totally blindsided,” recalled Clara Godfrey, who has lived in the area for much of her life.

After the murder, she explained, most of the groups “scattered like cucarachas”.

Over time, however, vigilante groups gradually rebuilt their presence in the area. And in recent months, as US President Donald Trump‘s anti-immigrant rhetoric hit a fever pitch ahead of the midterm elections, armed groups have flooded the area, setting up camp on Arivaca’s dusty outskirts.

The owner of Utah Gun Exchange, a group that dismisses the militia label, cruises through Arivaca in a BearCat armoured vehicle; another armed outfit, Arizona Border Recon, carries out armed patrols near the border situated 11 miles from Arivaca.

Outraged by their return to Arivaca, Godfrey and other town residents have called on the armed groups to leave.

Last month, Godfrey placed a lawn sign – “militia” with a large black circle and a dash through the word – in her front yard last month. “They look like what they’re doing: playing GI Joe,” she told Al Jazeera by telephone.

In recent months, Arivaca residents have held town meetings to decide how to handle the situation, floating ideas such as lobbying Facebook to shutter accounts belonging to the groups and their members, according to the Arizona Daily Star.

“I don’t want to live in fear that one of my kids is going to be the next Brisenia,” Eli Buchanan said at one such meeting in September, the local paper reported.

At campaign rallies and on Twitter, Trump repeatedly took aim at a US-bound caravan of Central American refugees and migrants, describing it as an “invasion” and claiming without evidence that “criminals” and “unknown Middle Easterners” have embedded in the group.

Meanwhile, vigilante border militia groups have also increased their operations elsewhere in Arizona, Texas and New Mexico, taking to social media to call on volunteers to join them.

The number of militiamen currently active in the region is unclear, but planning documents published by Newsweek on November 1 estimate that 200 individuals are active on the southwest border.

The southern border with Mexico has long loomed large in the minds of the American right, and vigilante patrols stretch back decades.

On October 27, 1977, David Duke, then Grand Dragon of the Knights of the Ku Klux Klan (KKK), held a press conference to announce plans to deploy members to the border in Arizona, New Mexico and Texas and detain undocumented immigrants seeking to enter the country.

The Klansmen drove up and down the frontier in a handful of towns. On the sides of the vehicles hung cheap signs that read “Klan Border Watch”. Government border agencies and politicians roundly condemned the Klansmen, denying Duke’s claims to have cooperated with authorities. 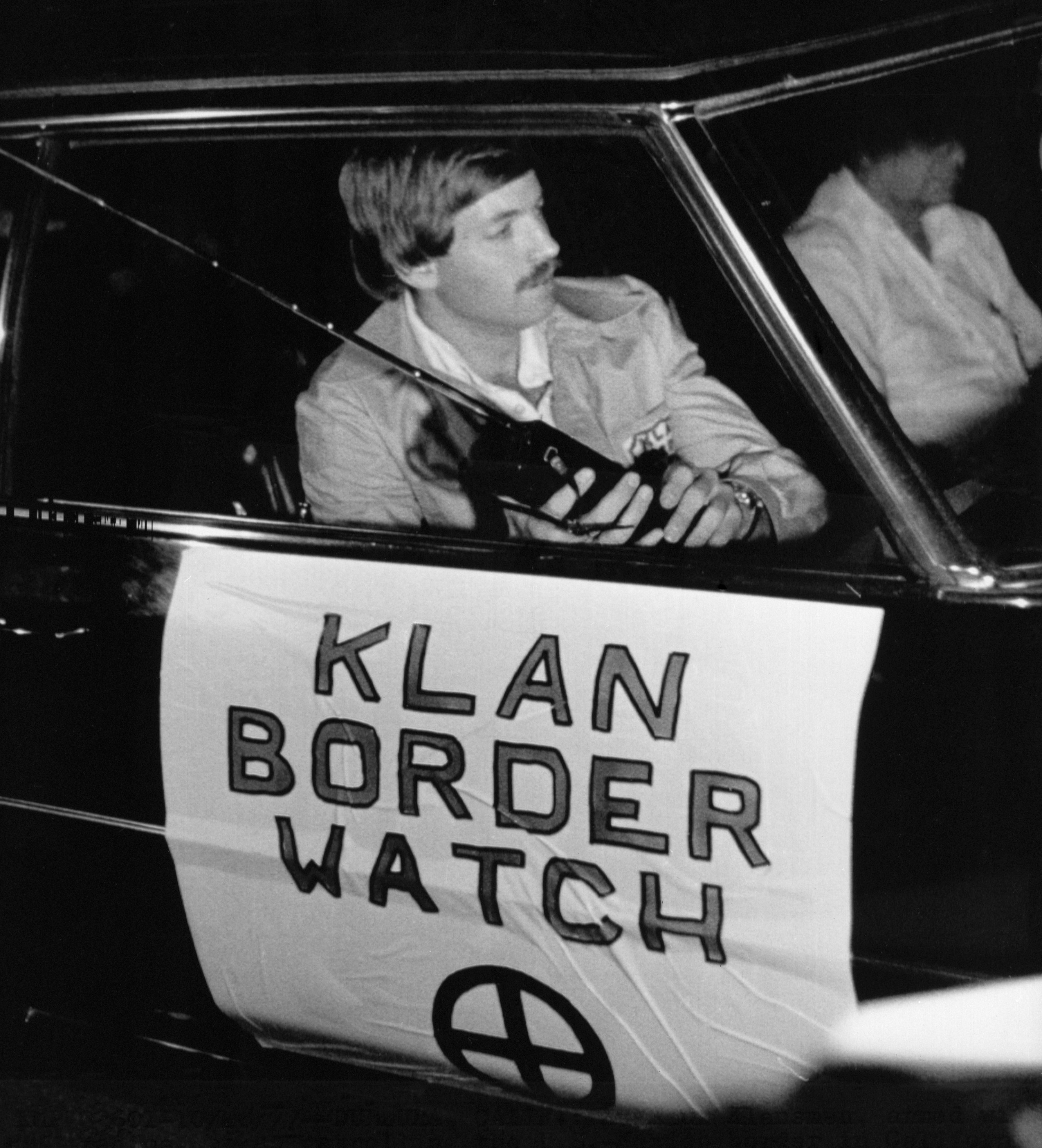 In the 1980s, militia groups started to pop up in various parts of the country, but the 1990s saw a sharp surge in such groups.

Throughout George W Bush’s (2001-2009) and Barack Obama’s (2009-2017) presidencies, several militia groups placed a tunnel-vision focus on the borderlands, packing up their weapons and heading south to carry out patrols and supposedly reinforce border guards.

Between 2013 and 2017, the number of militia groups operating in the US – on the border and elsewhere – grew from 22 to 41, according to the Southern Poverty Law Center (SPLC), an Alabama-based hate monitor.

Kathleen Belew, a researcher and author of Bring the War Home, explained that “various components” of the far right “have been focused on the southern border for most of 20th century”, directly linking vigilante border patrols to “overtly white power activism”.

Today, with the lines between Trump’s rhetoric and militia talking points blurring, Belew said, “Immigration and opposition to immigration have worked as a sort of bridge issue between very far-right and radical groups and more mainstream politics.”

At odds with locals

As the US-bound caravan, whose participants plan to apply for asylum at an official port, crept at a snail’s pace toward the US, Trump deployed thousands of soldiers to the southern border.

Fueled by dizzying conspiracy theories, anti-immigrant hoaxes and a steady stream of misinformation from the White House, militia groups also flocked to the borderlands in recent weeks, answering what they interpreted as a call to action.

In Arivaca, residents and immigration advocates accuse Veterans on Patrol, the Utah Gun Exchange and militia groups of harassment, intimidation and violent threats.

Tim Foley, founder of Arizona Border Recon, also denied his group was a militia, although court documents suggest he has a long history of involvement in militia outfits, the Arizona Daily Star reported.

In a video posted on YouTube on November 2, Veterans on Patrol’s Michael Meyer, a non-veteran vigilante who goes by the moniker Arthur Lewis, accused aid workers from Humane Borders of “aiding child traffickers”.

Before arriving in Arivaca in September, Meyer and his group spent much of the summer spreading a conspiracy theory based on unfounded claims of a child sex-trafficking ring in the Tucson-area desert.

The claims, dismissed by the Tucson police, were picked up and disseminated online by Stewart Rhodes, leader of the Oath Keepers militia, the SPLC reported in July.

In a recent Facebook post, Meyer called on people to join them for “border operations” because “the caravan is coming fast”.

“We live in an ugly time right now; this is like Pizzagate,” Godfrey said, referring to the debunked conspiracy theory that alleged Democratic Party officials were linked to a child sex ring operating in several Washington, DC restaurants. In December 2016, Edgar Maddison Welch fired three shots from an AR-15 into the Comet Ping Pong pizza parlour. The attack did not injure anyone.

“We fear for our children,” Godfrey concluded.