Amazon pays $75 million to buy Joyo, the largest online seller of books and electronics in the growing Chinese market. But the division — renamed Amazon China — faced stiff competition. As of 2018, it only had 0.7% of online sales, trailing far behind Alibaba’s 58.2%, according to eMarketer.

During an earnings call, Bezos announces a $79-a-year loyalty program that includes free two-day shipping on any order. Now, with more than 100 million members worldwide, Prime is considered one of Amazon’s most valuable assets.

Just as the holiday shopping season is about kick into full gear, Amazon unveils its Kindle. The electronic reading device enables users to wirelessly download books, magazines and newspaper articles among other content. Starting price: $399.

In a decision that will transform Seattle’s real estate market, Amazon makes a deal with the city and a developer to consolidate its scattered workforce into 1.6 million square feet in a gritty industrial neighborhood north of downtown. The city raises height limits to accommodate larger buildings. The company’s new headquarters will eventually house 40,000 employees in more than 8 million square feet.

Amazon pays $300 million for Audible, which comes with a library of 80,000 programs in the United States and Europe. The move comes just two months after Amazon launched its Kindle device for e-books. Audible now holds 41% of the audiobook market, which has been growing rapidly with the rise of smartphones and streaming-enabled car stereo systems.

If you can’t beat ’em, buy ’em. Amazon buys online shoe retailer Zappos in an all-stock deal worth nearly $900 million. Despite attempts to penetrate the shoe market Amazon hadn’t been able to catch up with Zappos.com, which provides free returns and overnight shipping. After the deal closed, Amazon allowed the company to remain based in Henderson, Nevada, under CEO Tony Hsieh.

Amazon buys Kiva Systems, a Massachusetts-based maker of warehouse robots, for $775 million. The deal allows Amazon to amp up automation at its fulfillment centers, delivering products faster and with less need for human staff. Amazon later terminated Kiva’s client relationships with retailers like Office Depot and the Gap in order to keep the technology to itself.

Bezos says he will pay $250 million of his own money for the financially struggling Washington Post. His plan: To take it private and pump cash into new staff and better online products. The newspaper now says it is profitable. But the partnership hasn’t been without headaches: President Donald Trump has claimed the move was an attempt by Bezos to buy influence in Washington, D.C.

Amazon begins delivering packages through the US Postal Service seven days a week in Los Angeles and New York. It will later roll out the service nationwide. Although Amazon’s contract with the mail carrier is confidential, the USPS says it makes a profit on the deal.

Amazon enters the smartphone market with its Fire phone, which integrated with Amazon’s universe of media streaming options. But the phone flopped, forcing Amazon to take a $170 million writedown and cease production the following year.

Amazon buys Twitch Interactive, the three-year-old video game streaming company, for $970 million. The deal not only complements the work being done at Amazon’s own game production division, but it helps pull the global gaming community towards its cloud platform, Amazon Web Services.

After being blamed for the decline of independent bookstores across the country, Amazon opens its own physical retail location in Seattle. The store’s opening is meant to market Amazon’s growing list of electronic devices as much as it is to sell books. Amazon now has 15 bookstores in cities across the United States. 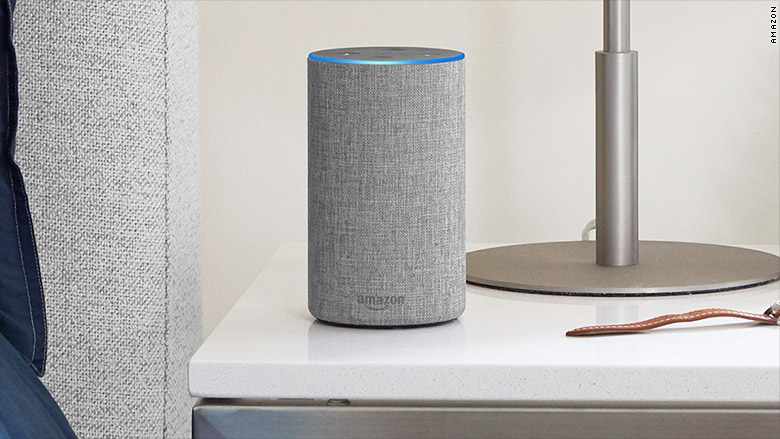 After unveiling its first smart speaker in 2014 to select customers, Amazon puts the Echo in 3,000 stores nationwide just in time for the holiday season. The Echo is the platform for Alexa, Amazon’s virtual personal assistant, and therefore the key to a wealth of consumer data and purchasing decisions.

After struggling for years in the intensely competitive grocery delivery business, Amazon ups the ante and purchases Whole Foods’ 471 stores for $13.7 billion. It has since started to integrate the two companies’ distribution networks and offer discounts to Prime members.

Amazon announces its search for a second headquarters
Share price: $979.47

Pushing the boundaries of its growth in Seattle, Amazon sets off a race between scores of cities across the United States and Canada to host its second headquarters. Bids include lavish tax incentives and real estate for the campus, among other goodies. A decision is expected by the end of 2018.

Fueled by investor enthusiasm for rising profits, Amazon’s stock price rises enough to make the company briefly worth $1 trillion. It’s the second company to pass that threshold, after Apple reached it earlier in the year, and analysts quickly started to predict $2 trillion won’t be too far off in the future.

Under pressure from unions and progressives like Vermont Senator Bernie Sanders, Amazon announces it will raise its minimum wage to $15 an hour, effective November 1. The change is expected to impact 250,000 of the company’s employees, plus 100,000 seasonal workers.