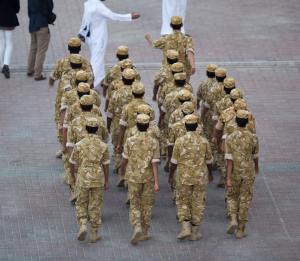 Hundreds of service personnel belonging to different units of the Qatar Armed Forces will march today along the Doha Corniche as part of their final preparations for the December 18 Qatar National Day celebrations.

A vehicular parade of the military units too will be held as part of the rehearsals for the National Day, together with 2,500 representing the country’s defence and security personnel.

This year will see an increase of 800 personnel including members from the National Service and Police College. An earlier rehearsal on Sunday was attended by Nasser Mohammed Ali Al Ali, General Coordinator of the National Day parade and Brigadier Salim Fahad Al Ahbadi, commander of the parade.

The Civil Defence department is taking part in the celebrations with several safety and security awareness activities. The awareness tent is all set with notable tips and events on fire safety. Preacher Abdullah Al Marri gave a lecture on safety in the viewpoint of religion.
Source: The Peninsula
Photo by Mariam Albalooshi