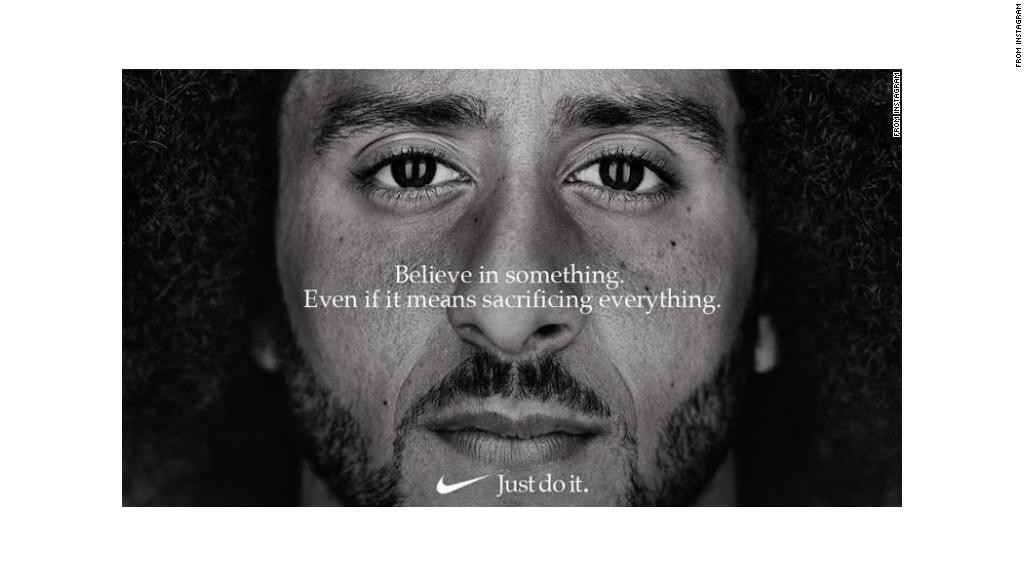 Shares of Nike (NKE) fell nearly 3% in midday trading Tuesday. #NikeBoycott was a trending topic on Twitter, with some people posting photos and videos of ripped Nike socks and burned Nike sneakers.

Many people also wrote messages of support for Kaepernick, who famously took a knee during the National Anthem before NFL games in 2016. Kaepernick said it was to protest several high-profile shooting deaths of black people by police.

Kaepernick remains unsigned and hasn’t played since 2016, but he started a movement that has polarized Americans. President Donald Trump has been critical of players for the protests.

One analyst expressed concerns about Nike’s ties with Kaepernick.

“Nike’s campaign will generate both attention and discussion which is, arguably, one of its central aims,” wrote Neil Saunders, managing director of GlobalData Retail, in a report Tuesday. “However, it is also a risky strategy in that it addresses, and appears to take sides on, a highly politicized issue.”

The ad could ultimately alienate customers and turn them to rivals’ products — which is not the purpose of a marketing campaign, Saunders said.

One money manager, however, didn’t think Nike would be hurt by any Kaepernick backlash.

“This is a company that’s not afraid to take sides,” said Tom Stringfellow, chief investment officer with Frost Investment Advisors. “It’s part of the brand to be controversial and get their name out there.”

Customers didn’t flinch. Nike has enjoyed strong sales and earnings this year. Nike’s stock is still up nearly 30% in 2018, even after Tuesday’s drop.

Rivals Adidas (ADDDF) and Under Armour (UA) are thriving, too. Adidas shares are up more than 20% while Under Armour’s (UAA) stock has gained more than 40%.

The increased threat from Adidas and Under Armour is the main reason Saunders didn’t think it was a good idea for Nike to court controversy. He worries that it could damage Nike’s market dominance.

“While it is noble to take a stand on something, it is also commercially imprudent to dash headlong into a very sensitive issue which polarizes opinion,” Saunders wrote, adding that Nike “cannot afford to make bad decisions.”

The company will report its earnings on September 25. Executives may talk about the new ad campaign and its effect on sales during a call with analysts.